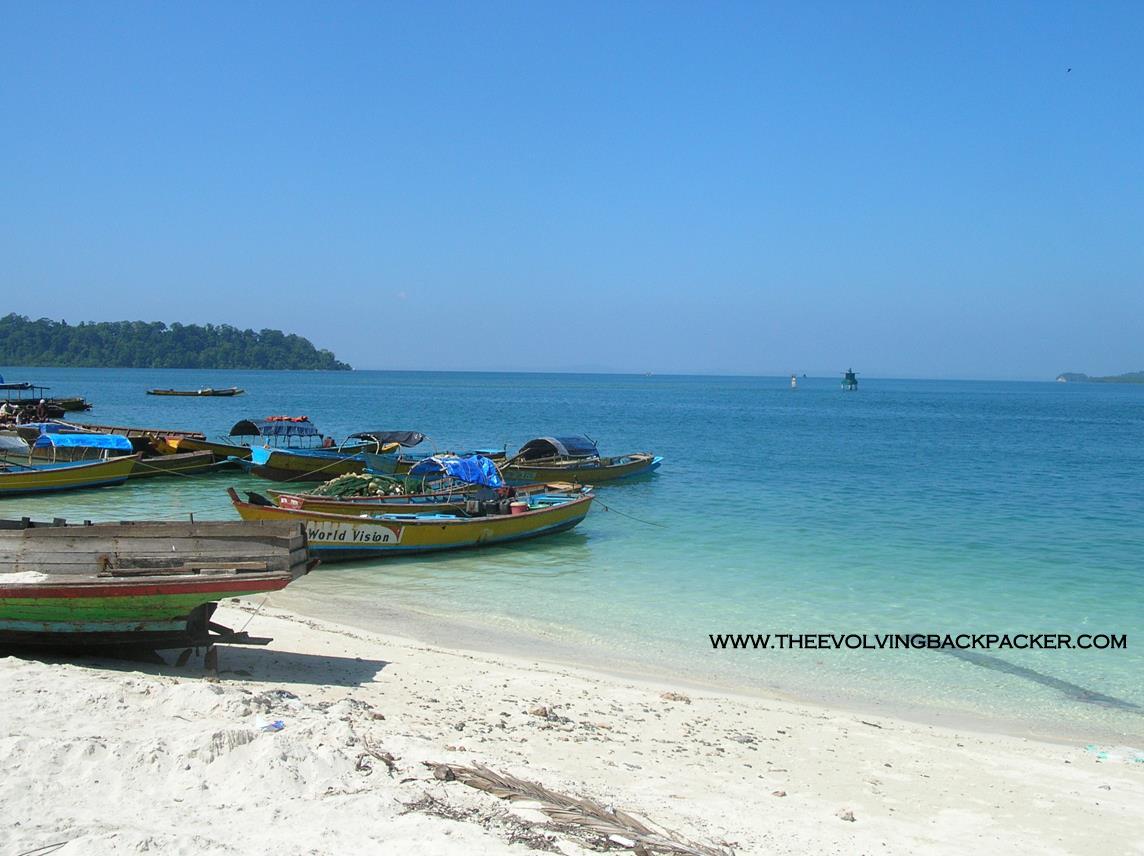 Well it had to happen sooner or later. Ever since I had seen a picture of the pristine beaches and azure waters of the Andamans in one of those ‘Incredible India’ ads some time back, I could feel this tugging at my heart wanting me to pick my backpack and land at such a place […]

Well it had to happen sooner or later. Ever since I had seen a picture of the pristine beaches and azure waters of the Andamans in one of those ‘Incredible India’ ads some time back, I could feel this tugging at my heart wanting me to pick my backpack and land at such a place and claim it as my own….if only for a moment.

Whilst planning this fortnight trip I wanted to stick to the unwritten Backpacker Code –to spend as little as possible, see as much as u can, travel to the farthest reaches, make a bag load of friends and have limitless fun and colorful experiences all through.

The biggest cost burden for this trip was quite obviously the flight ticket. However, thanks to the low-cost airlines I got a relatively good price. (Rs. 15,000 /- Return fare Mum-Chennai-Port Blair).

I had done some pre travel research of some of the locations and activities on the net and also via the Lonely Planet Guide. However I did not do any bookings coz I wanted to keep my meanderings as open ended as possible. 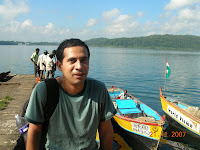 Day 1 – Landed in Port Blair. The few glimpses of the scattered islands from the aircraft were kind of a visual appetizer before the sumptuous buffet of experiences lying in store for me.
The main town had a sort of a run down feeling. The people however were quite friendly.
Checked myself at the YMCA a low cost, no-frills accommodation. Visited the A & N tourism Office where I got some brochures and some valuable tips for obtaining permits and for travelling between islands.

Day 2 – Took the local bus to Chatham Jetty, the step off point to go to Bamboo Flat jetty, the gateway to Mount Harriet (2nd Highest Peak in Andamans). Visited the Saw-Mill located at the edge of the jetty which conducts a guided tour of the place.

In the afternoon visited the Cellular Jail which is a National memorial and is quite an experience especially the Sound and Light show conducted in the evenings both in Hindi and English.

Day 3 – Boarded the local bus for Diglipur at 0400 Hrs. The journey takes about 11 hours and runs North along the entire route cutting across rolling forests and paddy fields. We also transit a tribal zone inhabited by the Jarawa tribes, during which vehicles have to travel in a convoy. The tourists are strictly warned not to interact / take photographs of the tribals if encountered during the transit. At Diglipur Stand took the local bus heading further North to Kalipur, about 16 Kms from main town. Checked myself in Pristine Beach Resort because of the ambience, the location (it lies at the edge of the beach).
Day 4 – Set out early wi 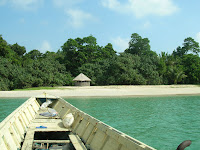 th a packed lunch and a guide to Ariel Bay jetty, the jump off point to Ross and Smith Island. Prior visiting this island one must obtain a permit from the forest department situated near the jetty. The boat trip, to and fro cost me INR 500 /-. The journey to the island takes about 45 minutes. The two islands are separated by a narrow sand bar which is accessible during all heights of tide.

Most of the travelers claim that these islands are amongst the most beautiful and I vouch for that without reservation. Did a bit of snorkeling and swimming. Had my packet lunch with my guide and was sunbathing the rest of the afternoon.

Day 5 – Today my heart was set on scaling Saddle Peak, the highest point in Andamans standing about 732 Meters ASL. Being a national park, a permit is required for access to the peak . The journey to the base is along a rocky beach for a distance of about 6 Kms. The pebbles and rocks along this relatively virgin stretch are quite unique. This was also the place where I had my first encounters with leeches who despite my best efforts always managed to creep into my sneakers and have a bloody feast at my expense.

Day 6 –
This was a day of rest and relaxation. Grabbed my novel and headed out on the beach and lazed around the entire day. I was practicing the art of doing what every island vacationer should do – Nothing. It’s funny how we cram up so many activities during our travels that we rarely have time to catch a breather. 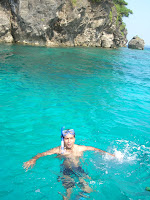 Day 7 –
Headed out to Ramnagar, famous for it’s long stretch of beach which is a nesting ground for Olive Ridley turtles. Some of the other attractions include 40 Caves, a natural formation of numerous deep crevices and a look at the crocodiles in the river running through Kaleghat.

Day 8 –
Having had my quota of solitude and silent misty moonlights it was time to head down south where all the action was and do what was one of my biggest desire during this trip – SCUBA Diving. Returned to Port Blair via a passenger ferry named MV. Jolly Buoy. The journey of 8-9 Hours was quite relaxing and I got lots of special attention from the Captain and the crew as soon as I told them that I was a navigator myself.

Day 9 –
Got to Phoenix Bay jetty in time to get onboard the M.V. Dearing. This ferry runs to full capacity and pre booking is very much recommended. The three hour journey was quite relaxing. Once again, I spent most of my time in the bridge sharing sea stories with the captai 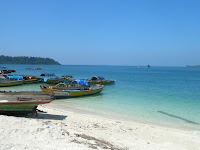 n. The first glimpse of Havelock Island during the approach was enough to set my pulse racing. Never before had I seen such crystal clear, emerald green waters where u could see right to the bottom. Boy was I in for a treat!!

Checked myself in Pristine Beach Resort at Beach No.5. This place is run by a very friendly person named Alex whose father runs the show in Diglipur. The cottages are eco-friendly, and a few steps away from the beach.

In the evening rented a bike and headed out to Radha Nagar Beach (rated amongst the top 10 beaches of the world!!) to watch 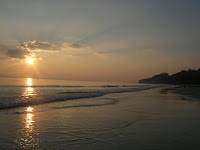 the sunset. Truly, this beach is simply beautiful. From the long stretch of virgin white sand, to the azure waters and the glorious sunset, it takes your breath away.
Rode back to Havelock after sunset but I guess a part of me stayed behind for eternity just as much as a vision of that special sunset has remained with me ever since.

Day 10 –
Headed out to South Button Island for snorkeling with three of my friends whom I had met during my stay in Diglipur. This island is rated as one of the best snorkeling/diving site

in Andamans. The island is steep sided 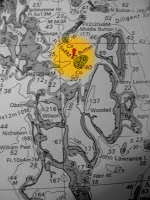 on all sides and has no safe landing. Not being good swimmers, we were a bit anxious when we arrived at the site as the depths were no less than 6 meters. However our guide provided us with life rings and gave us a run through on the correct snorkeling techniques. After the initial fears waned we actually started enjoying ourselves. The waters were so clear and the corals were so abundant and multi colored that towards the end we were gasping not for want of air but from sheer pleasure of having witnessed such glorious sights. We snorkeled for about two hours had our lunch anchored off the island and then returned back to Havelock.

The trip back was in absolute silence. I guess we were exhausted by the experience. But more than that, I think we were each, in our own way, reliving those moments spent with our heads underwater, the riot of colors and the various coral formations transporting us to our own private Atlantis where we were Lord Supreme and everything around us moved in fluid harmony.

Day 11 –
Set out to Island Vinnies, a diving outfit just a couple of shacks south of where I was staying. I had enrolled myself for a one day Discover Scuba Diving session the day I had arrived in Havelock and today happened to be the big day. I had another dive buddy, a girl named Maria from Denmark who was also diving for the first time. We were led by an able instructor named Mandy who briefed us on all the safety aspects and checks needed to be carried out before and during the dive. The dive was conducted at Elephant beach, located on the north west coast, about 45 minutes ride from Island Vinnies. 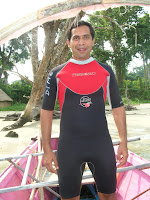 We were led by Mandy through a treasure trove of live, breathing corals and were down for a total of forty five minutes. We had lost all track of time though as we glided effortlessly soaking in (pun intended!) the stunning sights. A few times we passed by a shoal of rainbow fishes and also happened to see an eel and a few starfishes.

If there is one thing I realized at the end of the dive was that only if we dare to do things seemingly beyond our reach, if we challenge ourselves to experience a little more than the ordinary, then an amazing world of dazzling splendor opens up forthwith and these uplifting experiences are what makes our existence richer and more wholesome.

Day 12 –
Woke up early to watch the sunrise. Later lazed around on the beach, soaking in the last of the island sun, wading in the pristine waters and wanting to live it up to the very last moment. As has been said, the only sad part about entering paradise is that you have to leave someday.
Bade my goodbyes to Alex whose hospitality and warmth made my stay in Havelock an even richer experience.
Caught the late afternoon ferry heading back to Port Blair completely charged and totally satisfied.

Day 13 –
This being my last day I had to hold myself from drifting off far from Port Blair and it took quite an effort to suppress the urge. Instead I decided to do some of the usual touristy stuff. Booked myself for a half day excursion on a ferry. We first visited Ross Island, a mere thirty minutes ride from Port Blair. This island was termed Paris of the East and was practically a self sufficient society inhabited by the British in their hey days. It is controlled by the navy and has some beautifully preserved brick colored ruins.
Later the ferry took us to Hut bay for a ride in the glass bottomed boats and a look from atop the lighthouse located here.

Day 14 –
Caught the morning flight back to Mumbai via Chennai craning my neck to the very last moment after take off from Port Blair, seeking one last glimpse of the islands, these dazzling pearls strewn around the ocean and being ever so grateful for having had an exper 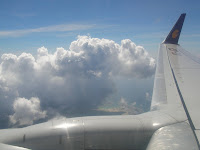 ience of a lifetime, memories to cherish forever.