Planes, Trains and Automobiles – Travel tips within India and summary of travel modes whilst backpacking the North East of India 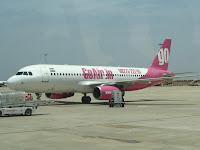 Mumbai to Chandigarh :  Low cost airline – Go Air // INR 3030/-
My trip to Chandigarh was to catch with a dear old friend and batch mate of mine from the navy.
Helicopter Ride :

Tawang (Arunachal Pradesh) to Guwhati  : INR 3,000/-
One of the few things I splurged on. Although the cost is quite high, it is highly recommended as the journey lasts only one hour (The same journey by road, a distance of 525 Kms   takes about twenty hours through the arduous mountain roads and you will most definitely have to break journey at Bomdila) . Besides, the views whilst up in the air are absolutely breathtaking. After about ten minutes after take –off you enter Bhutan, passing meandering rivers and streams, gushing waterfalls, and mountain fields and small picturesque hamlets. The change from high mountains and rolling hills to the flat plains of Assam is quite sudden and dramatic and marks the entry back into India.
However getting a ticket is not as easy. I was lucky to get a seat due to a cancellation. Ideally you have to book at least a month in advance and even then there is no saying that you may get knocked off the passenger list to accommodate a state minister or high ranking army official. There is also the possibility of flights getting cancelled due to inclement weather.
TRAINS : 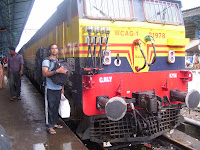 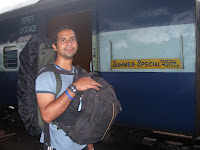 Tinsukia (Assam) to Itanagar – Private Bus (Network travels). I had to sleep in driver cabin as my seat could not get confirmed till the last minute. 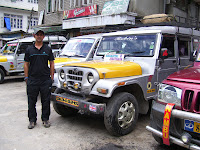 NJP to Darjeeling and back, Central Arunachal region – Ziro, Hong, Bomdila to Dirang and Tawang). Meghalaya (Shillong to Cherrapunji, Shillong to Mawlynnong_
Sikkim (Siliguri to Gangtok, Gangtok to Rumtek, Gangtok to Namchi, Namchi to Pelling via Jorethang
Pelling to Khecheopalri lake)
Cycle rickshaws : Within Siliguri town

And finally the fun (and free!!) way to go : Hitching a ride whenever and wherever possible 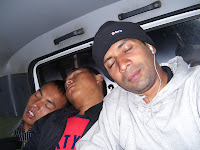 – Travelled in the back of Toyota pick ups in driving rain, picked up by kind locals in Maruti 800 and Maruti Alto , was offered a Tata Safari with driver to go from Tawang to Shungetser lake (Bumla Pass), and even travelled in the driver’s compartment  seat of dumper trucks.