A Saint whose Body remains incorruptible even after five centuries!! 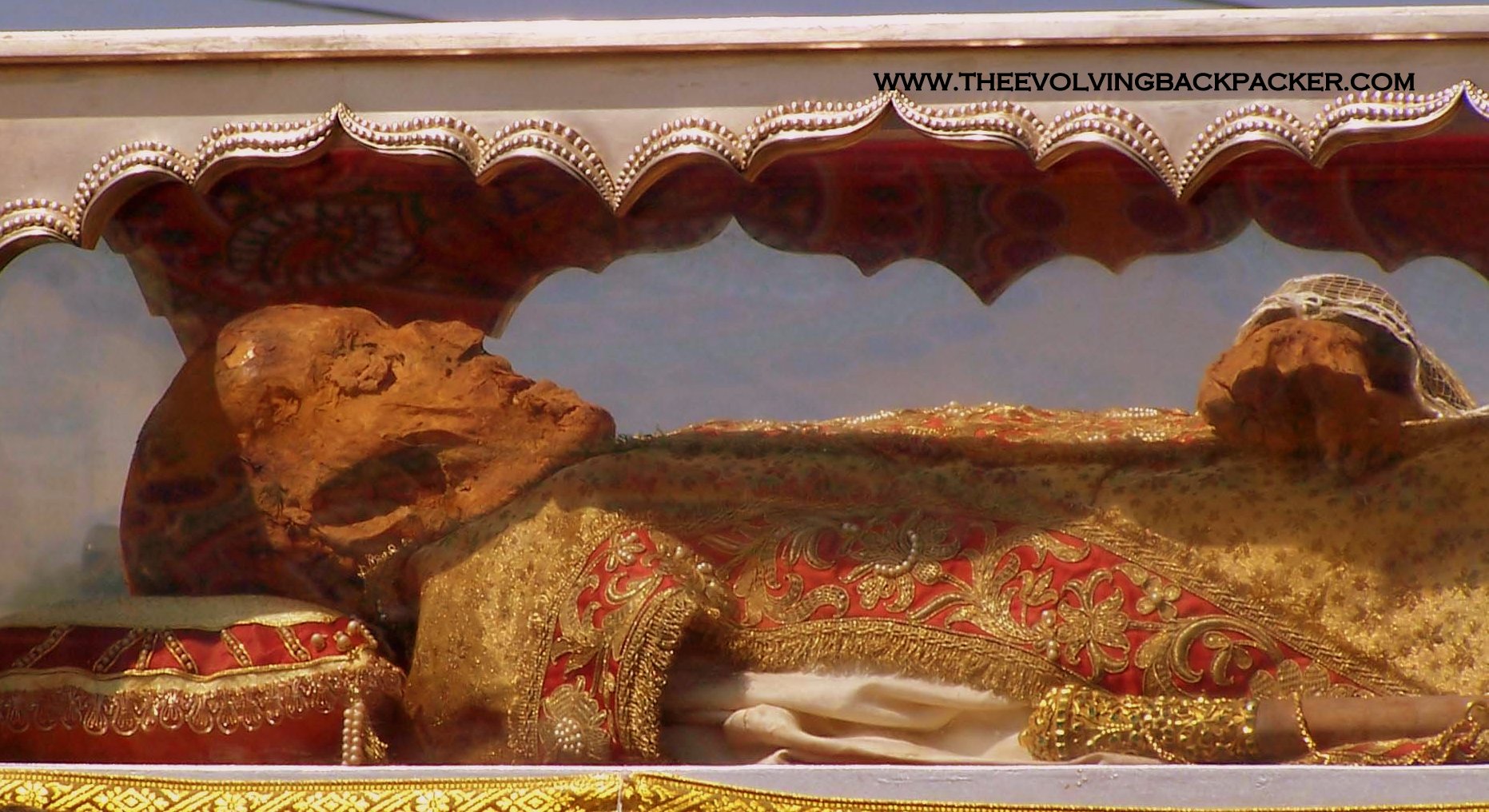 St.Francis Xavier, born Francisco de Jasso y Azpilicueta, on 7th April 1506 was the sixth and last child born to Dr. Joao de Xavier and Maria d’Aspilcueta at Xavier castle, Navarra(now part of Spain).   He was a Roman Catholic missionary who preached the Gospel of Jesus Christ to the people of Asia and was […] 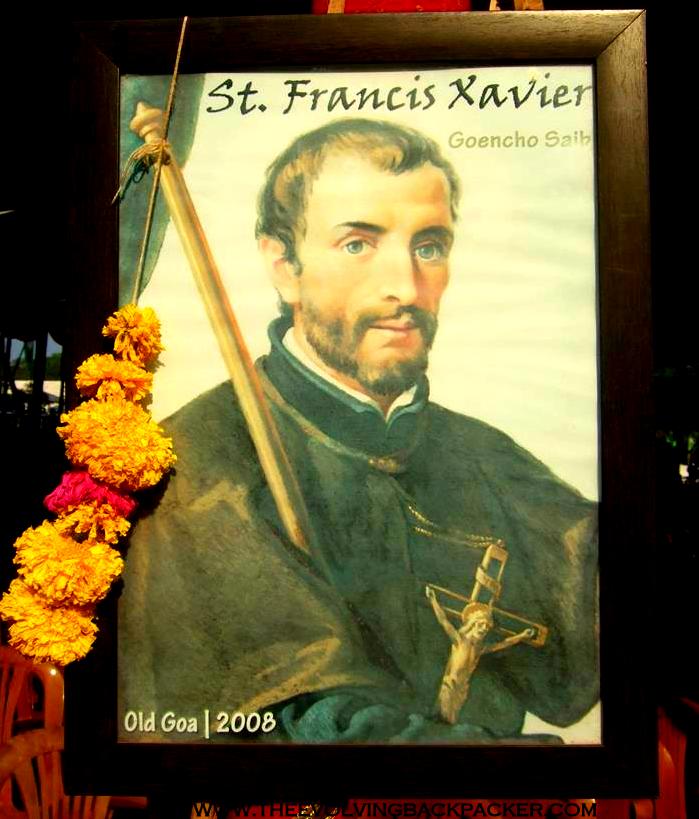 He was a Roman Catholic missionary who preached the Gospel of Jesus Christ to the people of Asia and was the co-founder of the Jesuits (Society of Jesus).

The body of St Francis Xavier which miraculously defied the laws of nature, of turning into dust, lies till this day in a silver casket in the Church of Bom Jesus Basilica in Goa, India. 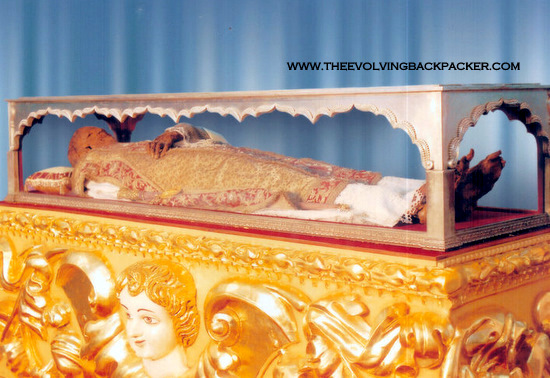 Ceremonies to honor his death are performed on December 3rd, all over the World, the day he was buried . The exposition of the blessed relics is held every 10 years.

The present exposition will be held this November from 22nd of November 2014 till 4th of January 2015, which will be the 17thpublic Exposition of the Sacred Relics of the Saint. 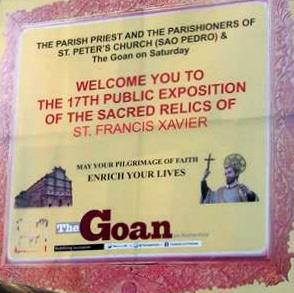 1) Held once every ten years, the present exposition is expected to draw nearly 5 million (50 Lakhs) people!!

3) The right hand of the Saint has been moved to a church in Rome.

5)  A famed missionary himself, he is now the patron saint of missionaries.

6) When Francis died in the island of Sancian in 1552, his Chinese friend Antonio buried him there in a wooden coffin as they used to do in China. Two layers of quicklime were added in order to accelerate the process of corruption of the body which would facilitate the transfer of his bones to Goa, which was a request of Francis himself. The body exhumed to on 17th February 1553 to check if the bones could be taken to Malacca and then Goa. To the astonishment of all it was noticed that after two and a half months in a coffin full of lime the body was as fresh as when it was buried. They realized that it was an extraordinary phenomenon. A miracle had taken place through Francis Xavier who was accepted as a saint in his life itself. 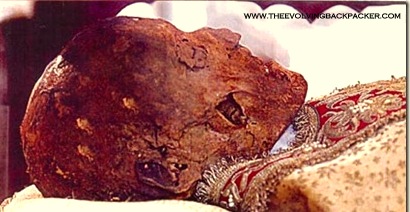 2) The Car Park is situated about 200 meters away from the Se Cathedral. There are shuttle buses provided from the
parking areas to the church grounds which run every 10 minutes. However it is a short 5 minute walk to the “Pilgrim Path”. 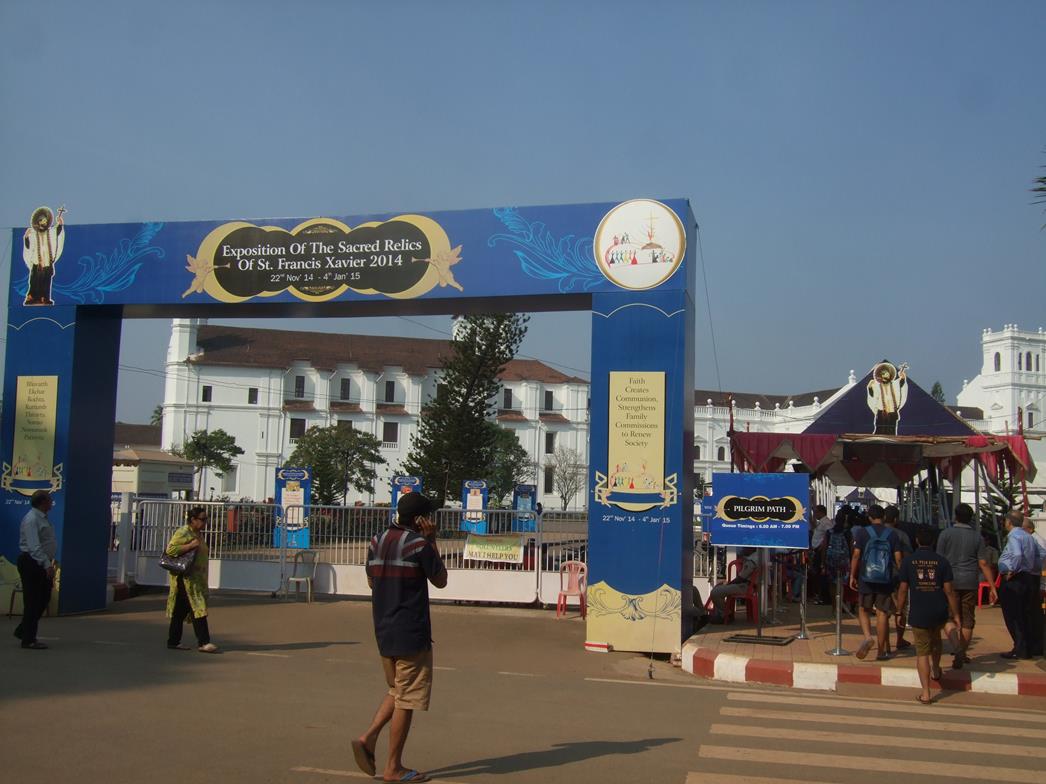 The serpentine queues are guided along well sheltered and marked passageways along the ‘Pilgrim Path”. It takes a good 2
to 3 hours of standing in the queues for catching a glimpse of the Saints Body. 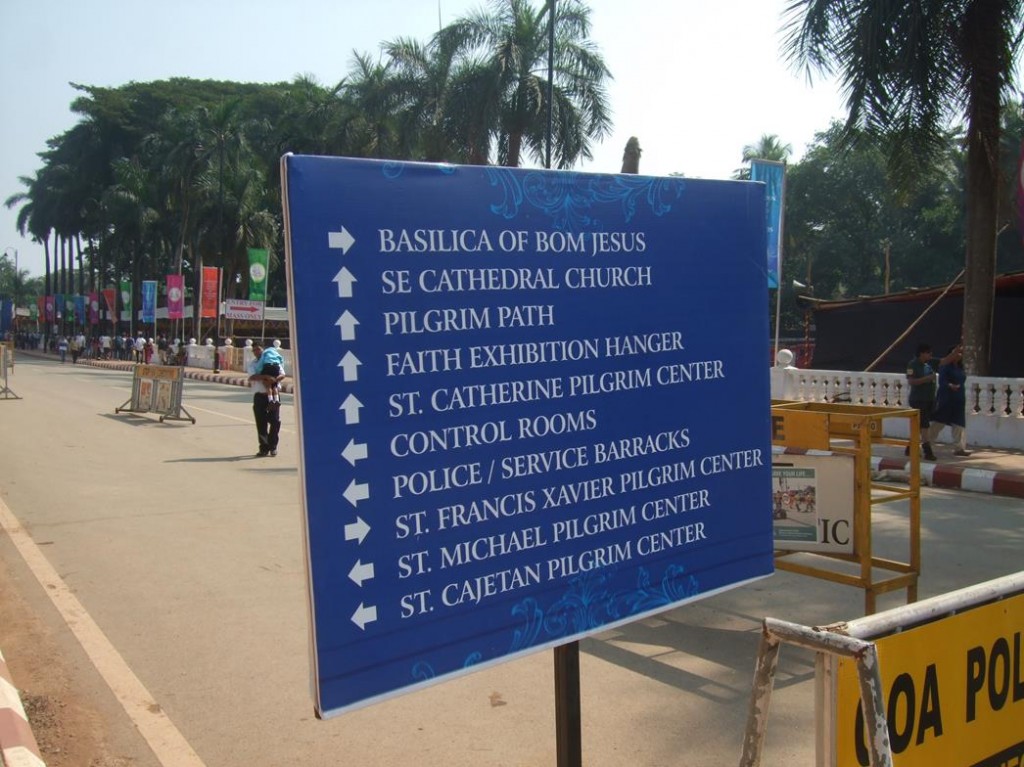 However the queue almost diminishes post lunch and one can literally walk in for viewing the relic.

I recommend, if time and situation permits, to visit the other churches around mid-day followed by the exhibition halls, the sound and light show, having a meal at noon and then proceeding for the main exhibition when the bus loads of out-of-city pilgrims have departed. 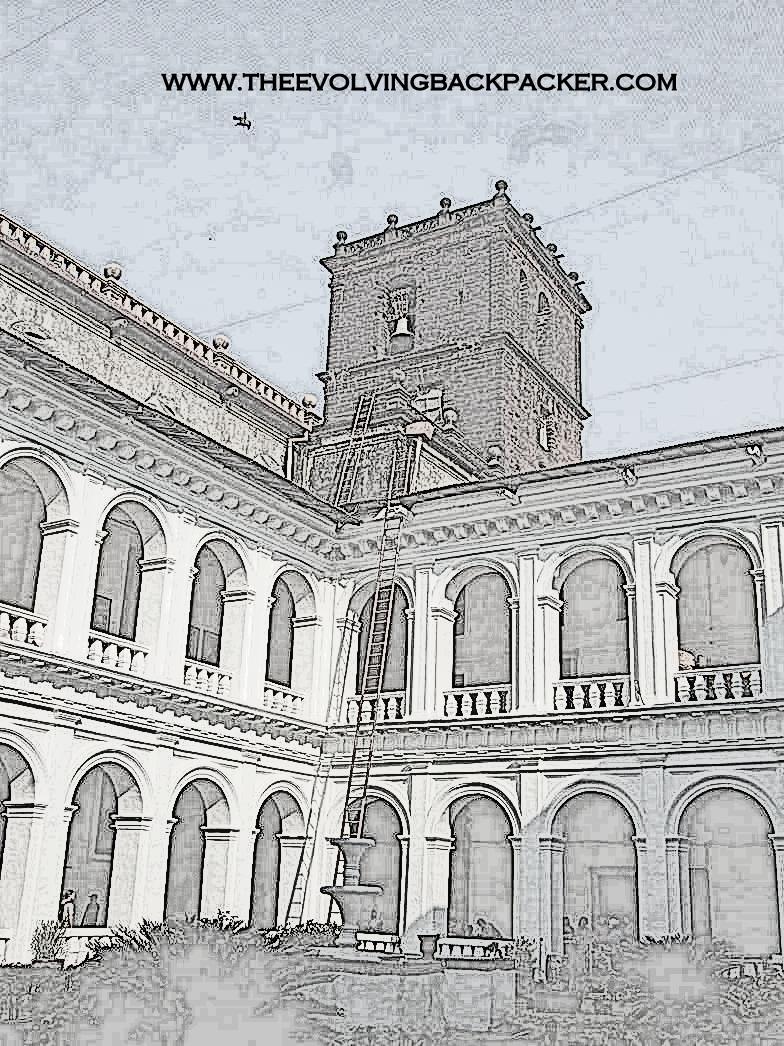 4) Sound and Light Show – Conducted within the Basilica of Bom Jesus the show is worth a visit. Lasting about 20
minutes, it tells the story of St. Francis Xavier in a life-sized and theatrical fashion which is quite engaging!!
Ticket cost – RS. 15/-. To get here exit the Bom Jesus main hall from the right and then take the left past the Confessional
area.

5) Eateries and Stalls – As with any religious gathering, the stalls outside add a a festive feeling and offer everything from beach towels to giant rosary beads, Music CD’s to giant cooking pots!!.

6) The restaurant near the dome shaped St. Cajetan church offers some great Goa Fish Curry Rice and also serves Beer and
Alcohol (It happens only in Goa!!!).

7) Masses are held throughout the day in various languages in the Bom Jesus Church Grounds. See flyer below for details. 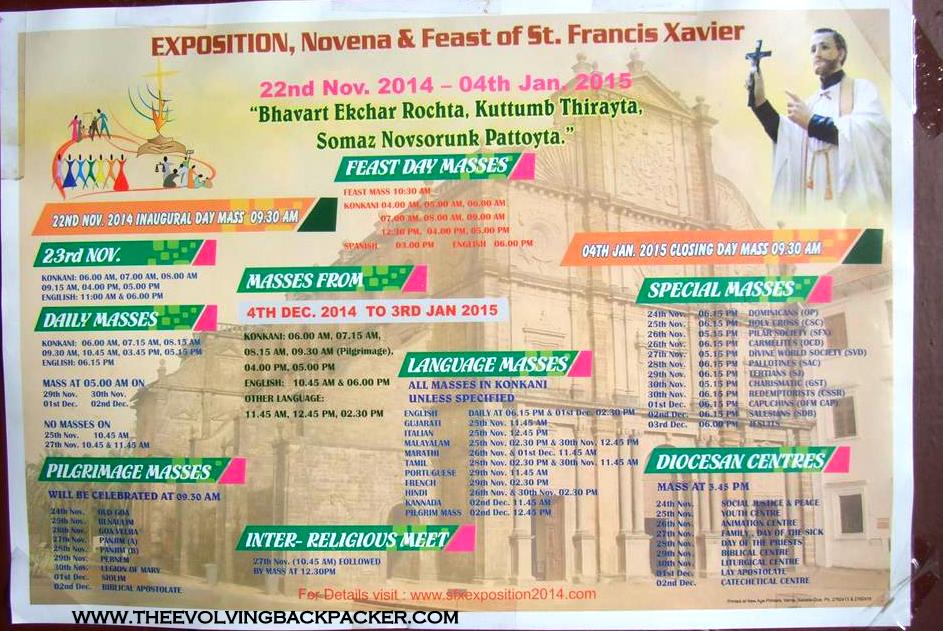 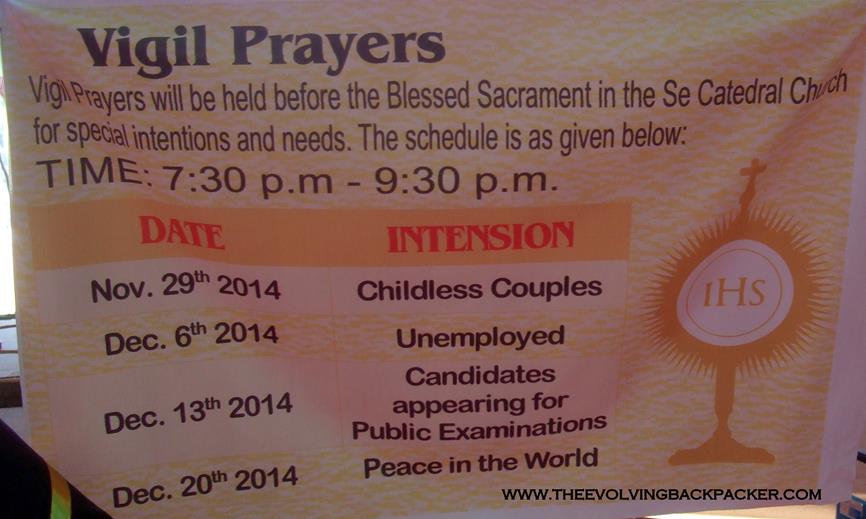 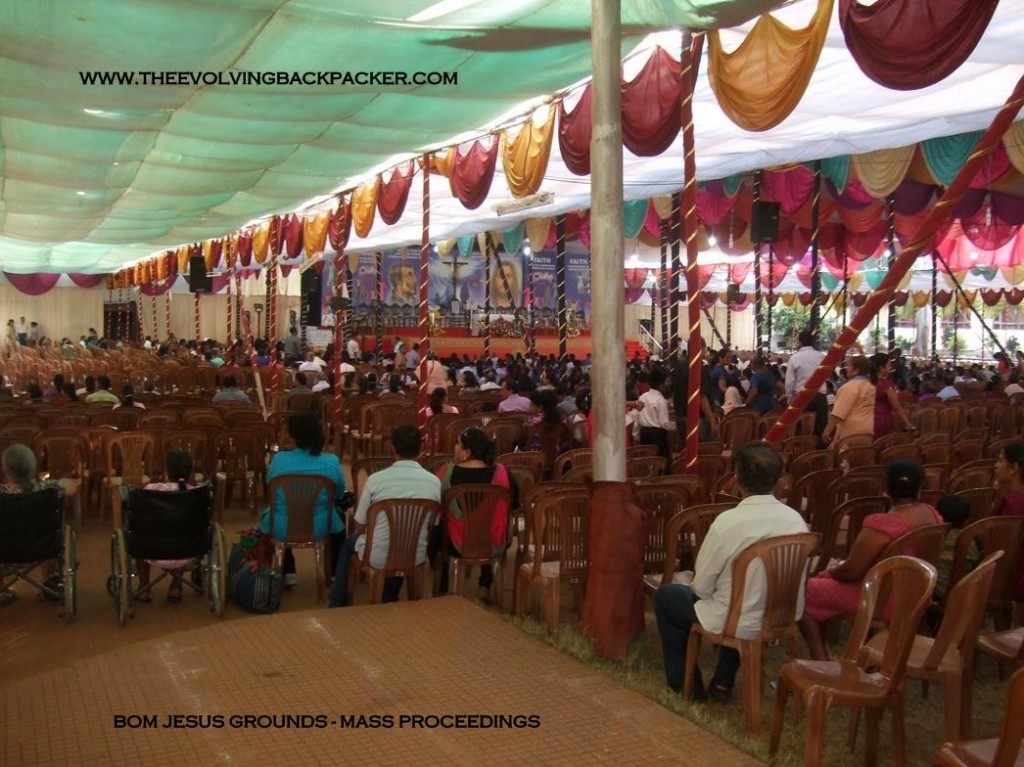 8) The other places of interest in and around the area are : 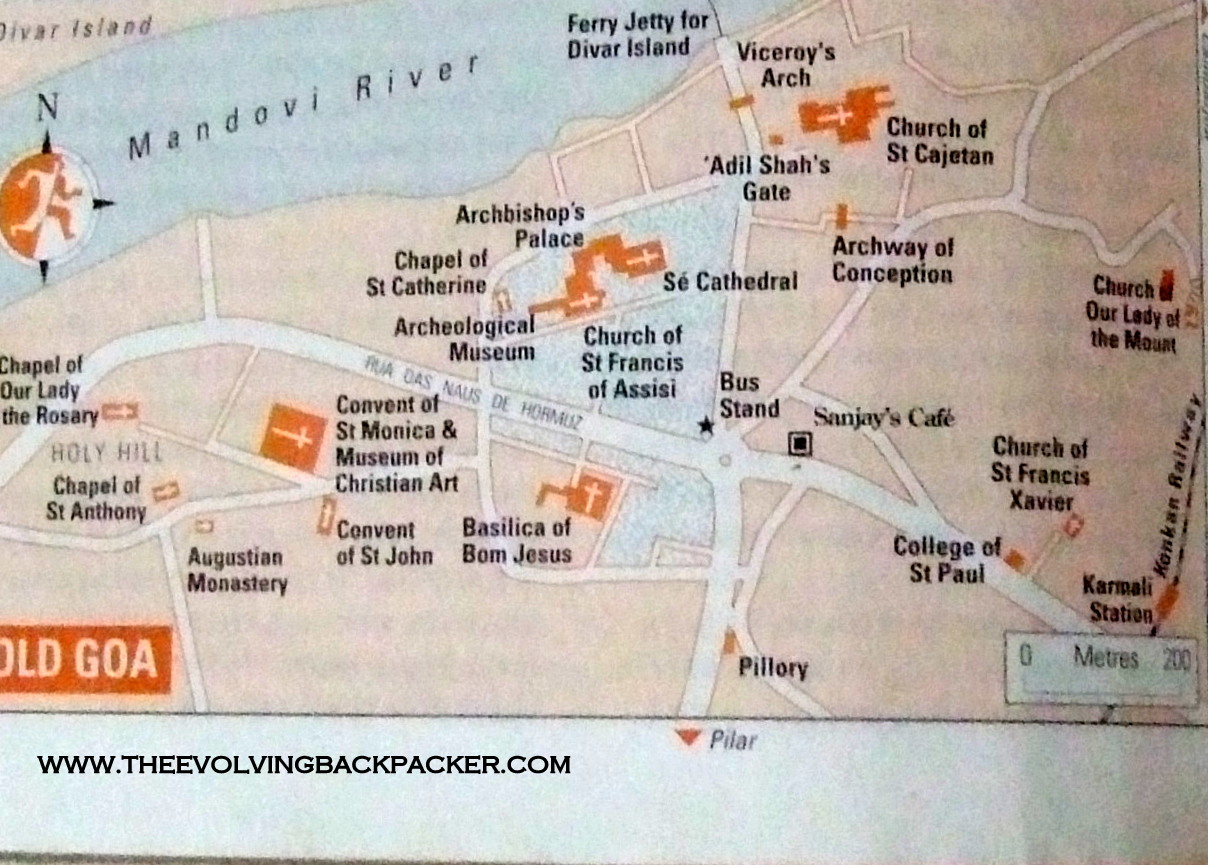 aa) The Archealogical Museum, Archbishop’s Palace and the church of St. Francis of Assisi located around the Se Cathedral. 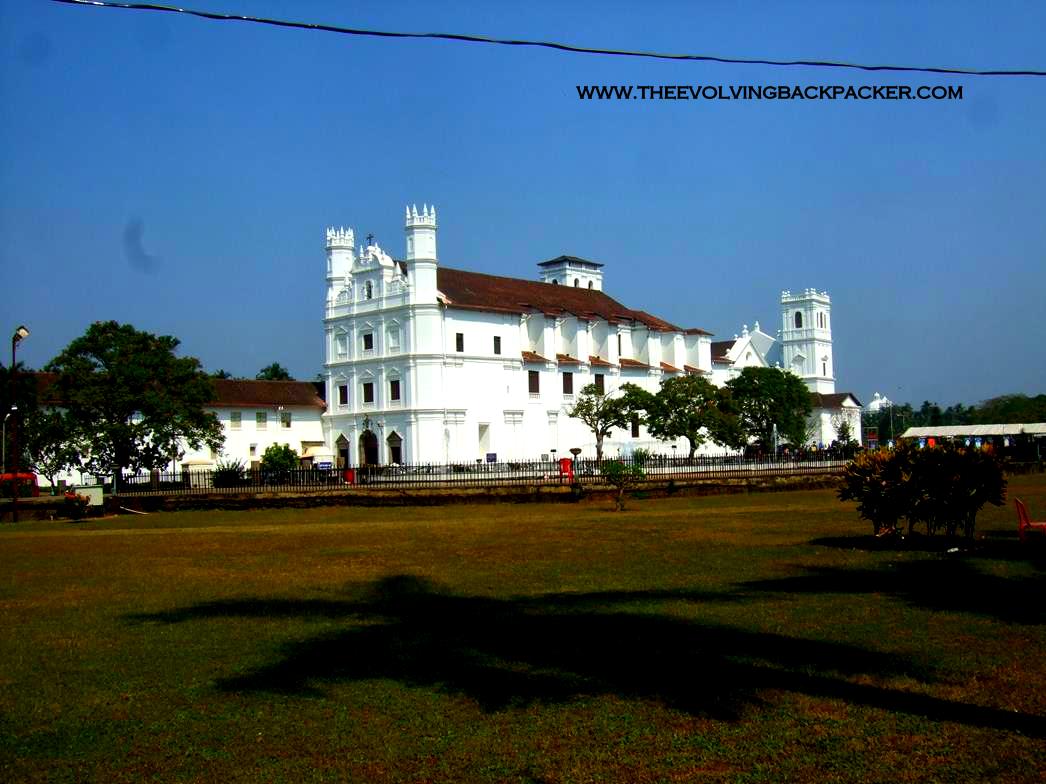 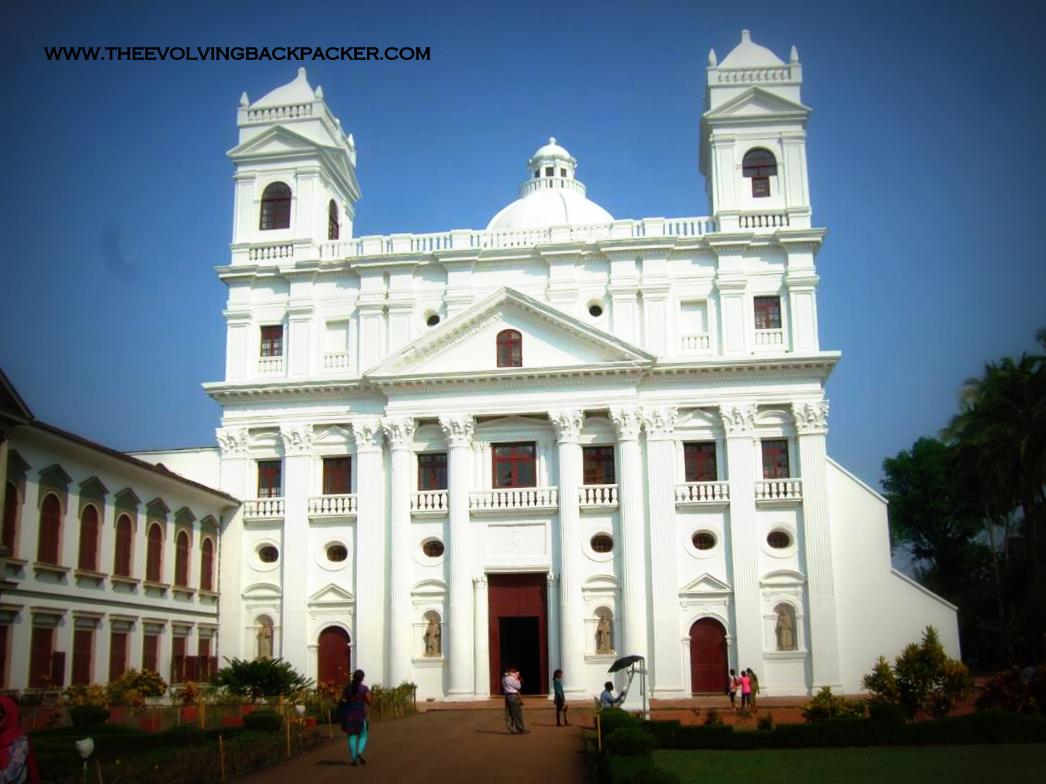 cc) Arch of Viceroy, a large arch built in 1597 outside St. Cajetan Church (which leads to the Mandovi river) and Adil Shah’s Gate (a smallish arch located within the premises of the same church). 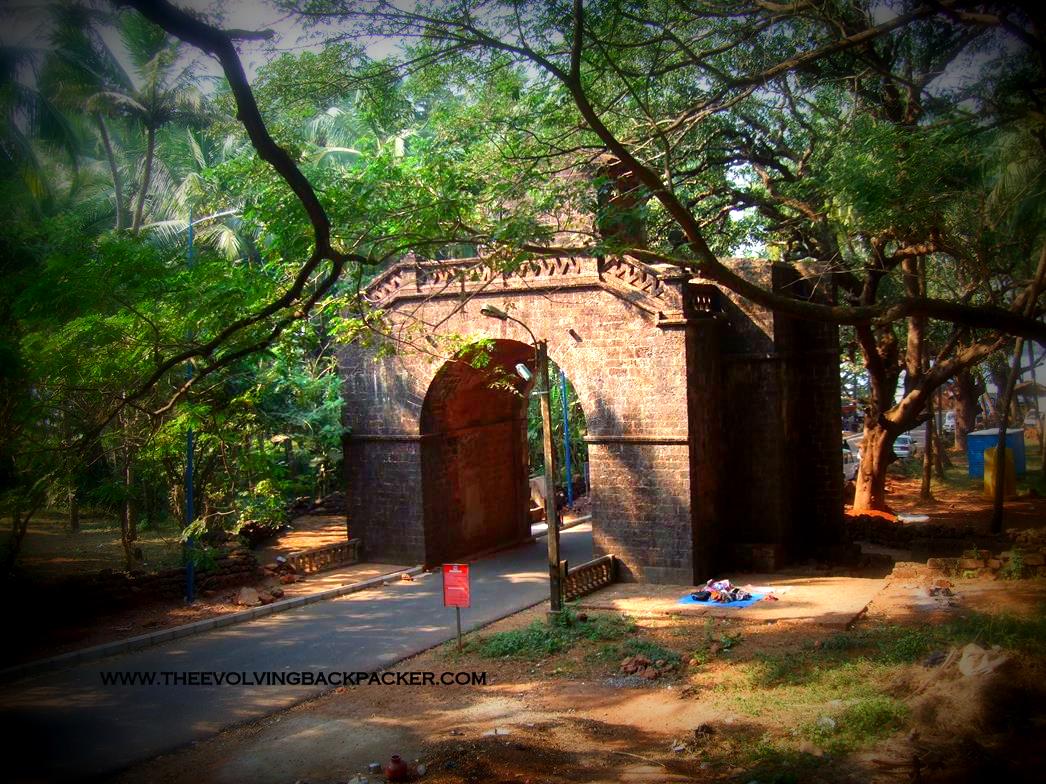 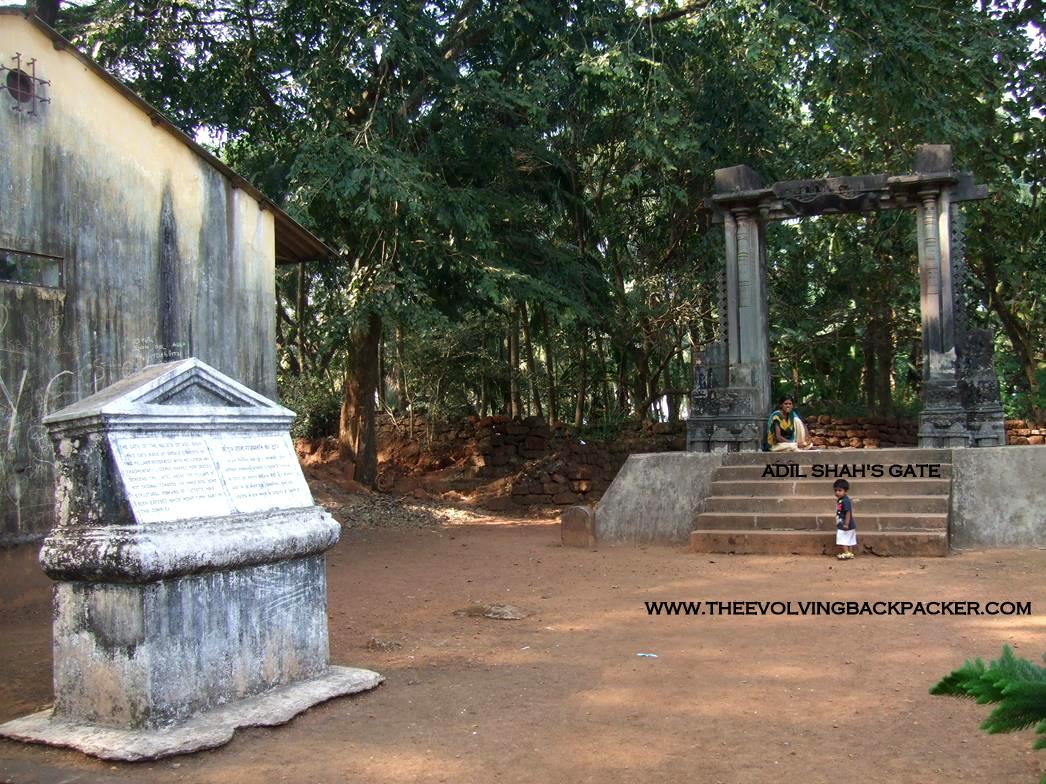 dd) The Miraculous Cross – Located in one of the fifteen altars that adorn the inside of Se Cathedral, this cross is located in the right hand corner altar walking in the cathedral from the main entrance (the area cordoned off from the  exposition area). This cross which stood in a Goan village was placed in the cathedral after a vision of Christ  appeared on it. Said to heal the sick, it is kept in a box, a small opening behind the altar allows devotees to touch
it.

ee) Basilica of Bom Jesus – It contains the original Chapel and tomb of St. Francis Xavier where he is laid to rest when not on exposition. 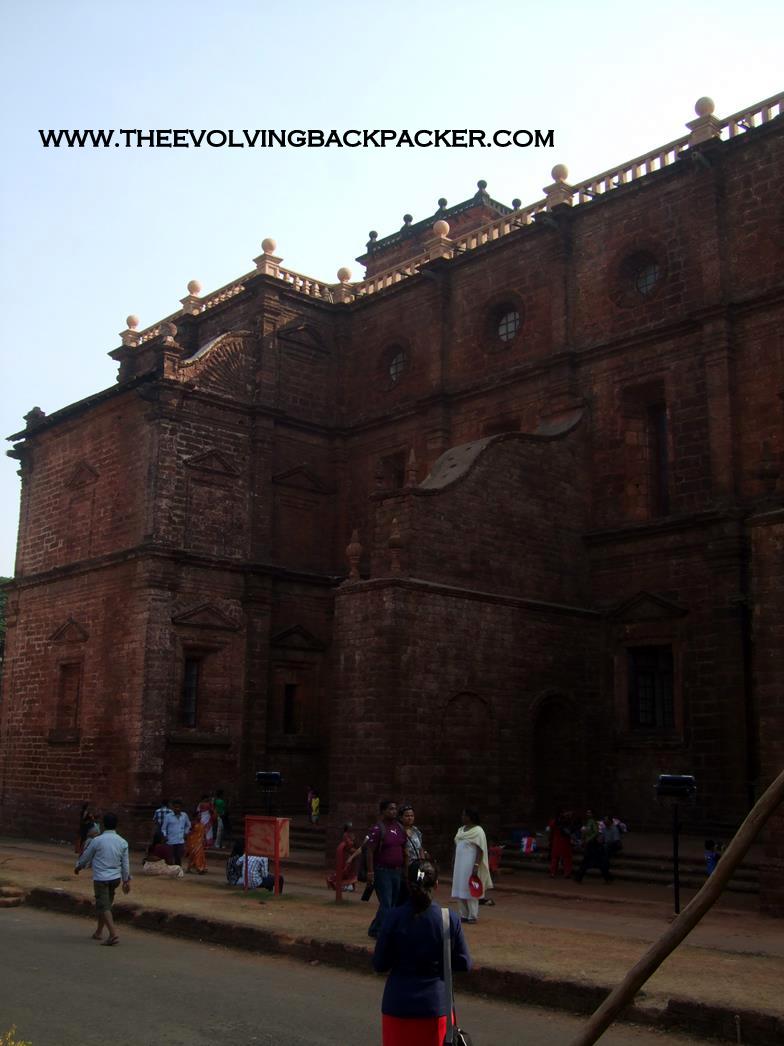 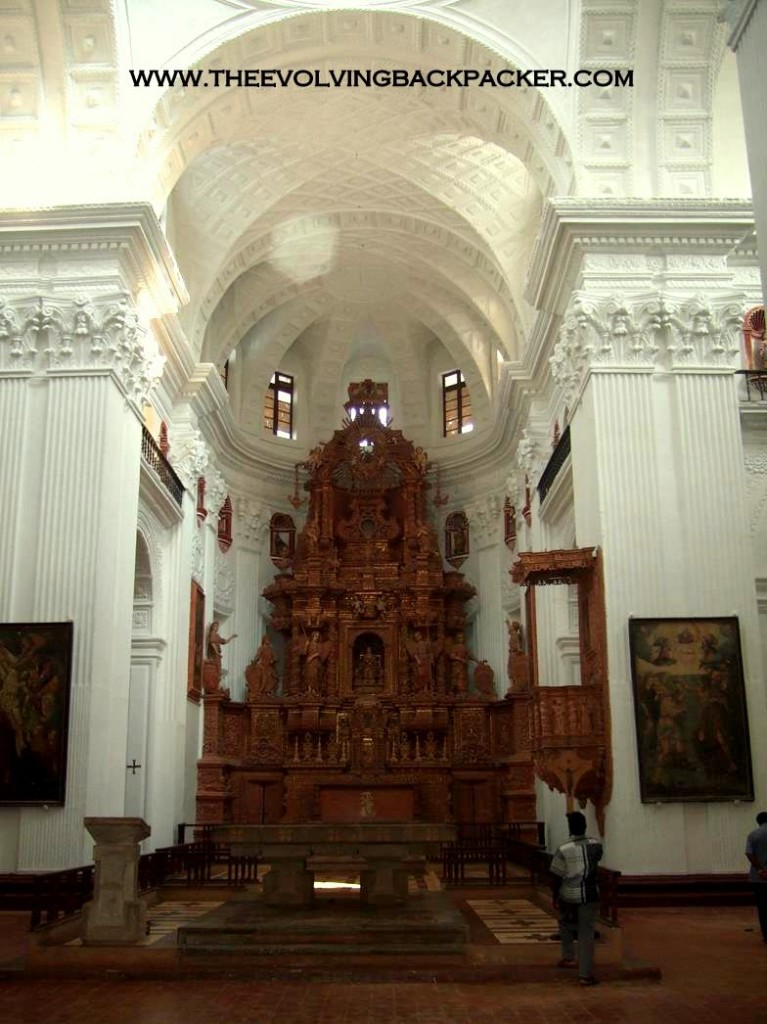 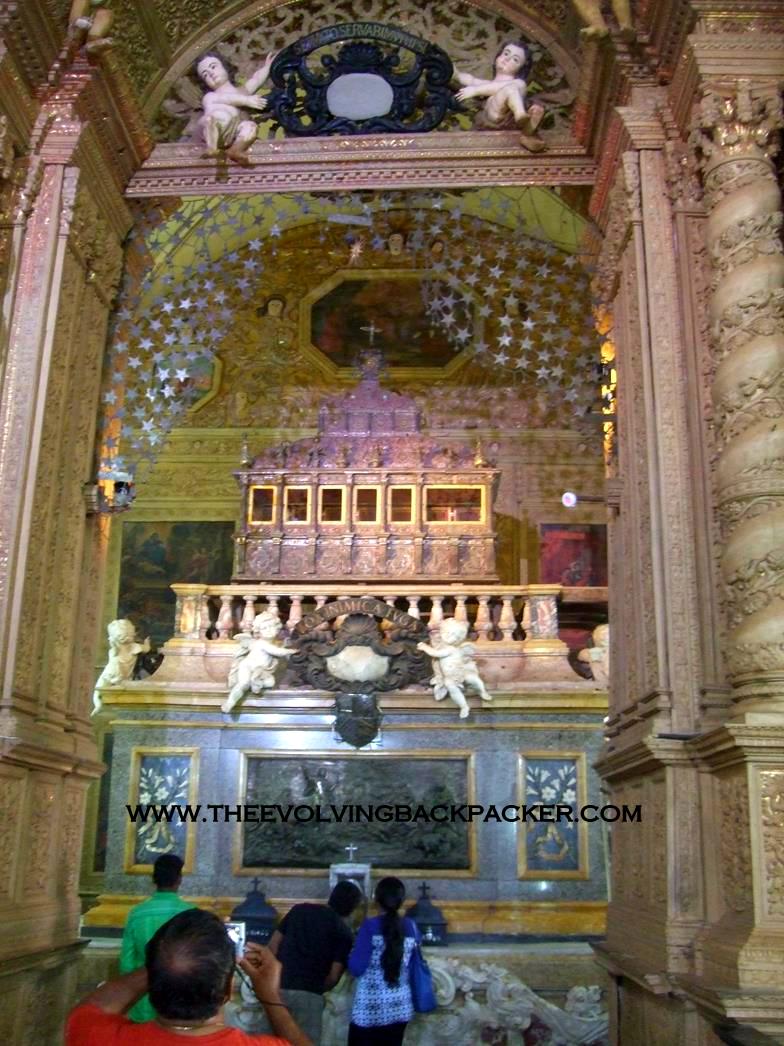 9) Lastly, stating the obvious, carry enough water, wear a broad brimmed hat to protect from the harsh sun, beware of your belongings and of pick-pockets.

10) The facilities for toilets, drinking water, wheelchairs and many such provisions for the devotees has been very well arranged and managed.

I would like to thank the clergy and and entire group of organisers, most of whom are volunteers, who have done such a
brilliant job in conducting the day to day proceedings and making the pilgrimage a pleasant experience despite the large
and overwhelming number of devotees from across the nation and the globe. 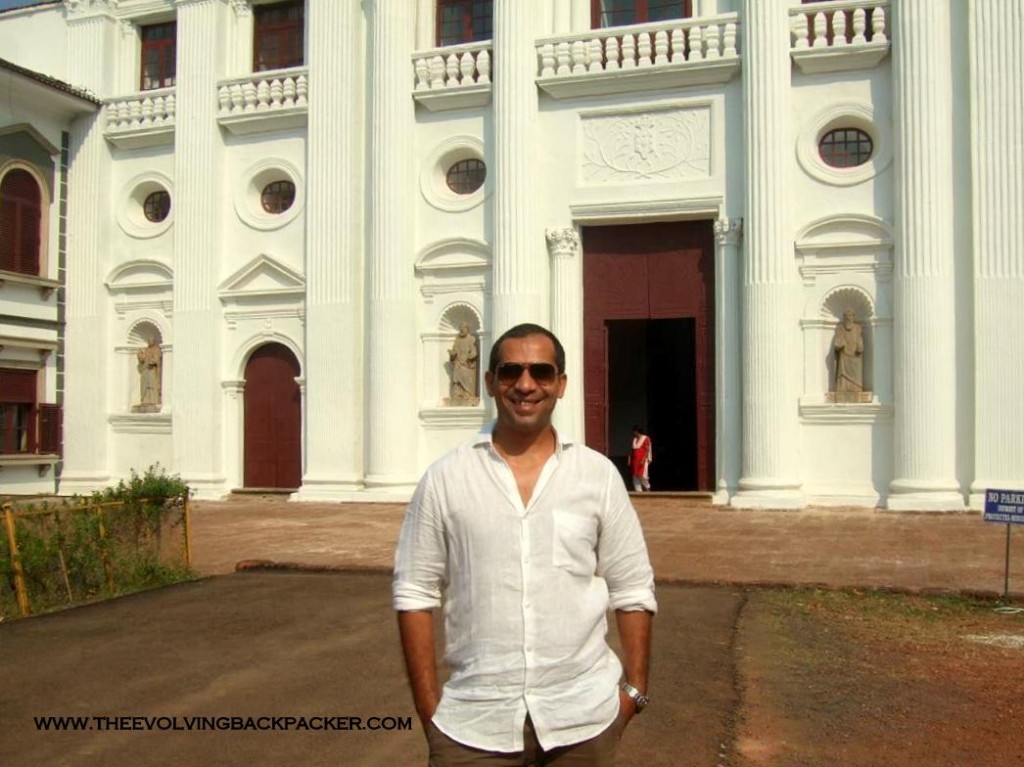 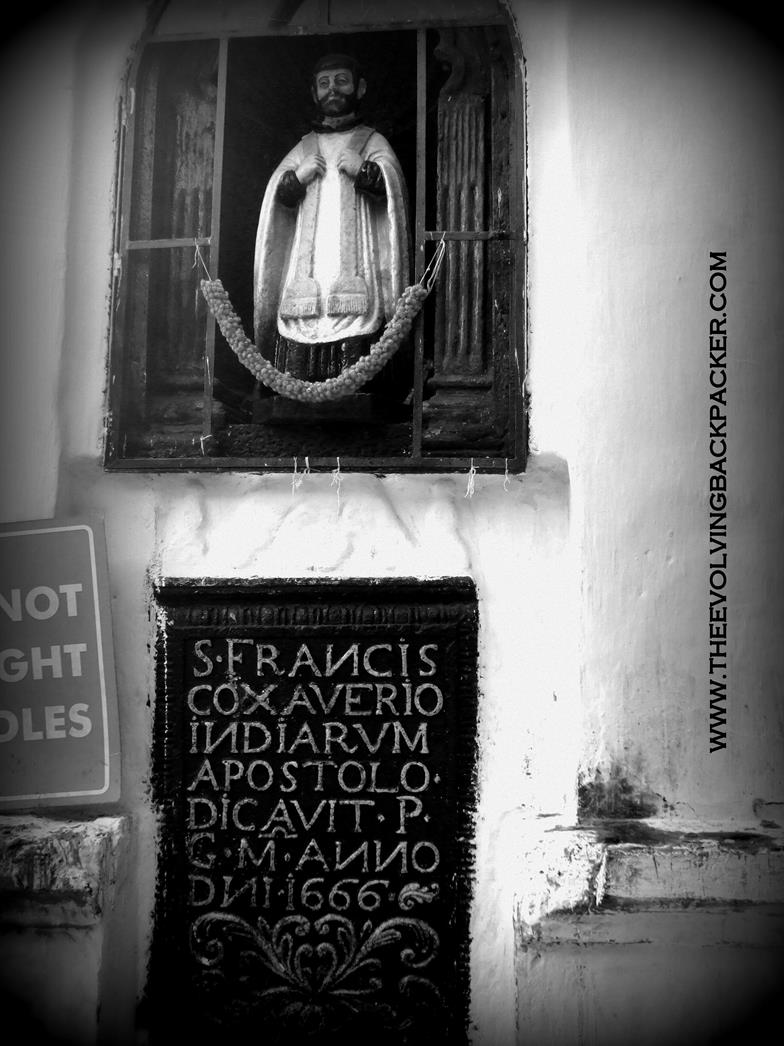